We wanted to explore north Ontario. Yeah, we hear you. You took a look at our travel map and said: ‘North? That’s not north!’ It is, in Ontario. There is exactly 1 continuously paved, east-west road across north Ontario – the Trans-Canada North.  There are a few paved roads that head north a few kilometers. And there’s one, mostly paved, 300 km (180 mi) road further north to a fishing camp at Pickle Lake. We don’t fish so we decided not to visit.

South Ontario? That is what’s east of Detroit. 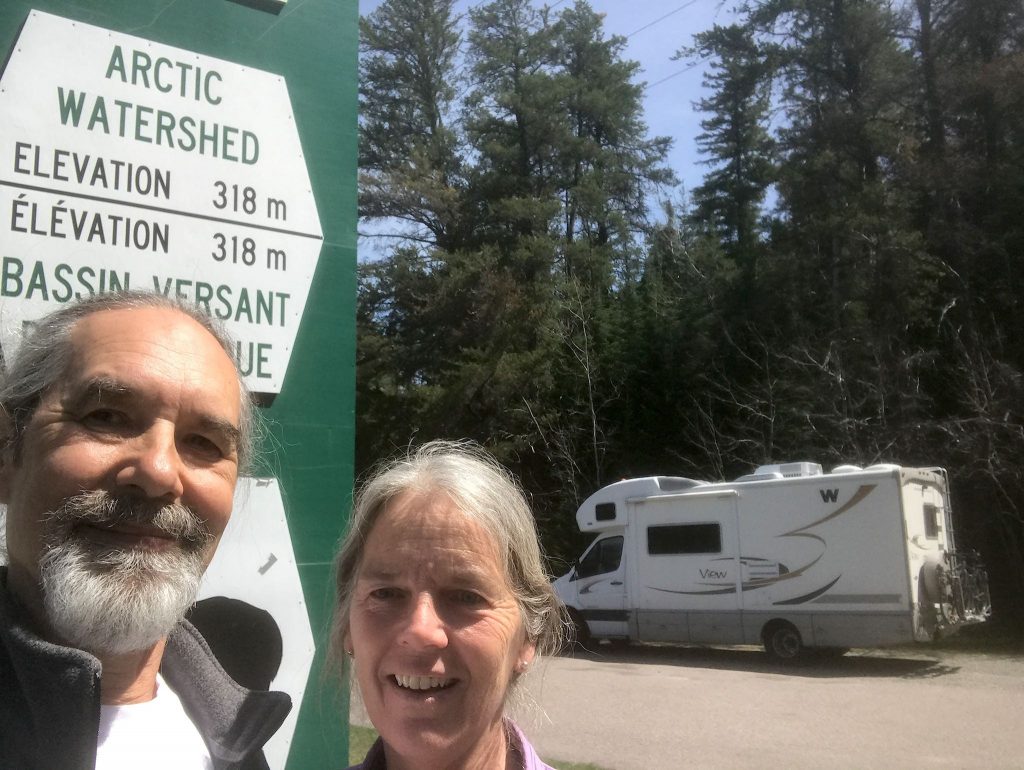 North Ontario is all within the Canadian Shield, an ancient (geologically speaking) rock plateau that starts in the northern midwestern states, makes up most of central Canada and surrounds the Hudson Bay. The rocky surface is covered by a thin layer of soil. Any disruption of the soil – like road construction – exposes layers of colorful rocks with grays, yellows and pinks in small clumps along the roadways.

The thin soil on rock also creates perfect conditions for boreal forest growth. So we’re heading north and the forest looks Maine-like, with lots of lakes and pine trees. Then, the forest rather suddenly looks different – trees are more uniform, and evergreens are shaped more like puffy poles than christmas trees, and there are bogs everywhere. I googled ‘boreal forest’ and saw a photo of the view out the window! Boreal forests are prevalent above the 49th parallel. Right on cue, we passed a sign for the 49th parallel picnic area. Lunch stop! Note the 49th parallel is also the designated US/Canada border west of the Great Lakes.

For 5 days, we’ve driven through sparsely populated areas (one sign indicated no gas for 300 km/180 miles). Each small town has a lake or 6 or 7, a hockey and curling rink and at least 1 outfitter/guide service, most with a float plane. The economy is based primarily on logging and related industries (cutting, transporting, milling and manufacturing stuff from wood), mining, and tourism (canoeing, fishing and hunting). The most prosperous of the towns are those with a paper mill.

And then we saw a tourist map. North of the roads are lakes, lakes, and more lakes dotted with fly-in camps. Most are open year-round provided guided hunting, fishing, canoeing, snowmobiling, cross-country skiing, dog sledding, ice fishing in super remote locations. So when Neil Young sings of a town in north Ontario, we suspect it’s more of a lake outpost than a paper mill town.

We really enjoyed visiting the Cochrane Polar Bear Habitat, a sanctuary for orphaned or rescued polar bears who otherwise couldn’t survive in their natural environment. Although open to visitors, the Habitat is primarily a research center, focused on creating a sustainable future for the bears. Designed to support 3 bears, we got to meet 2 of them (behind 2 inch think glass walls – these beautiful 450 kg /1,000 pound creatures do consider us lunch after all) – Henry and Ganuk.

We were surprised by Kakabeka Falls. Most of north Ontario is relatively flat. Waterfall? The falls drop 40 m (130 feet, Niagara falls is 167 feet) over a shale ledge on the Kaministiquia River. A network of trails brought us to both sides of the falls as well as along the river highlighting more, smaller waterfalls and an historic portage trail used by early travelers and fur traders from the 1600’s. 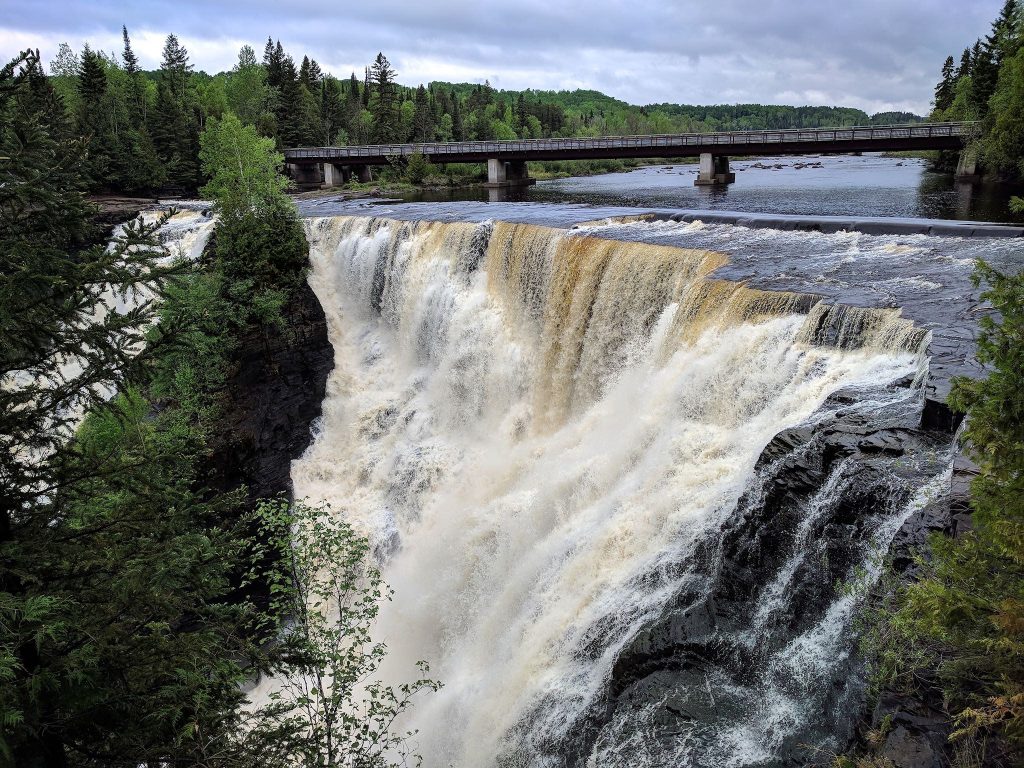 Kenora is a pleasant, small city located, as they all are, on a lake in north Ontario. But not just any lake. The northwestern most point of Lake of the Woods was used to demarcate the US/ Canada border in a 1842 treaty. After some challenges in actually finding the northwestern most point, and subsequently recognizing the challenges that point created, the border was adjusted by about 5,000 feet in 1925. It was still and remains the northernmost point in the continental US. A very historic lake indeed.