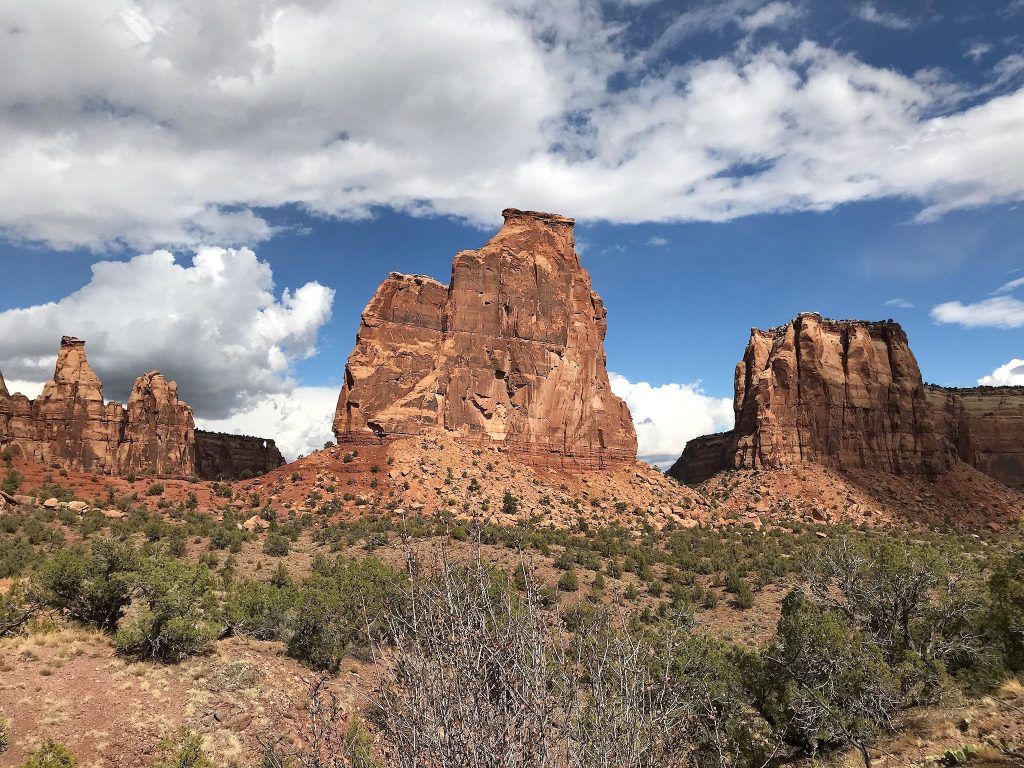 Colorado National Monument is one of the coolest places in Colorado we’d never heard of. It was late afternoon when our Google-Maps-suggested route took us close to this green splotch on the map. Oh, look, the Monument has a campground – so we set a course. Wow!

It was kinda cloudy and rainy and we could kinda see a ridge up ahead as we drove toward it. Once we passed the park entrance, we found ourselves on a really cool road using 7 switchbacks and 2 tunnels to get us 600 feet up from the valley floor to a plateau comprising the rim of a series of canyons. The specific geology of the area allowed the wind and the rain to create unusual steep, every-shade-of-red-and-pink-walled, flat-bottomed canyons covered with pinyon pines and junipers interrupted in places by 500-foot-tall monoliths. The campground was situated on the rim, between the Lizard and Wedding Canyons.

The Monument is in far west Colorado in the high desert. Annual rainfall is 10-12 inches a year. We must have seen it all for 2018! Despite the rain, we managed to get out and see the park. Although the brilliant colors of the desert were muted by the low light and not always reflected in our photos, we had fun with the dramatic clouds, interesting light, shadows and, of course, rainbows!

With a forecast for severe thunderstorms off and on all day, we decided the prudent option was to drive Rim Rock Drive, the scenic road through the park. It’s yet another of those not-simply-constructed-but-engineered roads that cut through mountains, cantilever over ledges, and use switchbacks to elevate vehicles through seemingly impossible-to-climb canyons. We stopped at 19 scenic vistas with views into the labyrinth of canyons below us. We left shortly after a brutal thunderstorm that had our little RV rocking and rolling, and returned to camp as yet another rolled through.

The day with the ‘best’ forecast during our stay had a 50% chance of rain all day. Good enough for us! We hiked down into Monument Canyon, the largest and most famous of the canyons, with a trailhead a short bike ride from camp. Delighted squealing started immediately as we switchbacked our way down nearly straight walls of the canyon near the Coke Ovens (a bunch of monoliths that look like coke ovens…), about 500 feet to the canyon floor. From there, we walked along the sheer cliffs and among monoliths (the monuments) with names like Kissing Couple, Grand View Spire, Pipe Organ, Praying Hands, The Island and the iconic Independence Monument. We got in the groove and started naming those without official names – The Void, The Face, the Crack and the Premature Arches.

Our trail ended at the base of Independence Monument. We arrived as the skies opened up. Fortunately for us, flash flooding was not a danger here and the canyon bottoms have lots of rocks and natural caves – we found one in which we enjoyed a delightful dry lunch with a view. We watched the storm pass though, then undertook a mostly dry return to camp.

The following day, despite a forecast for 80% chance of rain, I decided to risk a short hike while there was a small patch of blue sky. The Black Ridge Trail left from camp and meandered along a low ridge at the border of the park. This part of the park was definitively yellow, compared with the bright reds and pinks of the canyons. I had not realized that on the other side of the park border was the McInnis Canyons National Conservation Area. After meeting up with a group of bighorn sheep and crossing a pretty desert meadow, I came across a natural bridge. The head of the Monument Canyon was on my left while the head of the (red and pink) Devils Canyon in McInnis NCA was on my right. Looks like another potential hike… As the skies opened up, it was time for a not-so-dry return trip to camp.

For our bike friends, Rim Rock Drive is part of the Tour of the Moon circuit made famous in the Coors Classic stage races in the 1980s and featured in the movie American Flyers in 1985. Clearly this would be an amazingly fun and scenic 30-mile ride (were it not 40 degrees, windy, and raining). As we left The Monument to make our way further south, we noticed several other parks and hiking areas beyond McInnis NCA. We’ve got more to explore for next time we’re in this area…