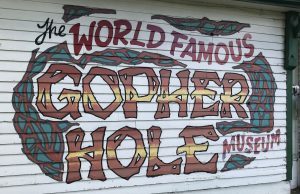 Larry highly recommended we stop at the World Famous Gopher Hole Museum in Torrington, AB, on the way out of Calgary. He said we’d like it, but he wouldn’t say why. Hmm. Well, Larry seems to understand us, and our sense of humor, so why not?

In the mid-1990s, Torrington, AB, a prairie farming community with about 170 residents, had adopted the gopher as its mascot and was considering ways to further increase tourism. To start, a committee painted colorful, unique gophers, each with its own individual history, on every one of the 12 fire hydrants  in town.

Next, they began brainstorming – what else could they do? The ultimate idea was to create a museum featuring stuffed (taxidermied) gophers. Really? Oh yes, and the gophers would be dressed in costumes. Costumes? Yes, and they’d be displayed in dioramas depicting significant places and events in Torrington.

Word of the town’s plan spread while the project was still in the conceptual phase, and the animal rights organizations put Torrington on the world map. The Gopher Hole Museum opened in 1996 to roughly equal parts acclaim and condemnation and continues to receive 6,000 visitors each year.

This outstanding museum is high on our list of off-the-wall-places to visit, right up there with Carhenge, Lakenenland, and Albert the Bull.

For those interested, here is a complete set of Gopher Hole Museum photos.

4 thoughts on “Gopher Hole Museum (What?)”