The grand concept for this trip was to make our way to the Canadian Rockies, visit (and hike!) the national parks there, and start making our way back. As Doug detailed in the two previous posts, we extended our westerly turn-around point to Penticton and added a music festival in Salmon Arm, both in BC. In addition to the five Rocky Mountain parks, we included the two national parks in the Selkirk range in our list, just a bit west of the Rocky Mountains in BC. The first of these is Mount Revelstoke National Park.

Revelstoke is a haven for hard core skiers, well known for its cat, heli and backcountry skiing. It’s also home to Revelstoke Mountain Resort, offering lift-served skiing on Mount Mackenzie. The ski area averages 1,200 cm (40 feet!) of snow per winter and boasts over 1,700 m (5,600+ feet) of vertical, the largest in North America. Yum! Downtown Revelstoke has that ski town feel with ski shops, gear shops and lots of small, funky restaurants and watering holes. Although we’re a bit out of season, it’s fun to absorb the familiar skiing vibe.

Revelstoke was established in the 1880’s by the Canadian Pacific Railway during the westward expansion. At the intersection of the railway and the Columbia River, it became a major transportation center and CPR’s mountain headquarters. The Revelstoke Railway Museum honors the significance of the railway in the town’s history. We found it fascinating to learn of the challenges of moving rail cars up and down the steep mountains and of the special, super-enormous and powerful locomotives designed just for that purpose. And (as skiers, this caught our attention) it was fun to learn about managing too much snow on the railway. Also, not far from Revelstoke, we visited the Last Spike in Craigellachie, BC where the Canadian transcontinental rail line was completed (and the last spike driven) in 1885.

Mount Revelstoke National Park is… different. It’s small and comprises one large mountain – Mount Revelstoke (elevation 1,575 metres/5,167 feet) – one road, numerous trails and a handful of remote, hike-in campgrounds. The key feature of the park is the Meadows in the Sky Parkway, a paved road which gains 1,365 metres (4,500 feet) in elevation in 26 km (16 mi) and 16 switchbacks, ending 1 km (0.6 mi) from the summit of Mount Revelstoke. The road is only open when it’s not snow season – July through September. All of the main hiking trails in the national park start at the summit.

After this elevation boost, which our camper handled admirably, by the way, we combined a few of the shorter trails with one of the longer ones into a day hike we’ll call the Lake Bagging hike. (For those who are unfamiliar with the lingo, hikers typically ‘bag’ or climb peaks. We were already at the summit…) About an hour into the hike, we found out why the road name – Meadows in the Sky – was chosen. It’s perfect! We hiked from one meadow to another on the route between Mount Revelstoke and Mount Williamson, separated by avalanche chutes, glacial debris and little waterfalls. There were long views from many spots along the trail, some smoky, others not so much. Wildflowers were in full bloom!

We first found Miller Lake, with cold, clear water perfectly reflecting the steep mountain walls around it, and a tiny island to one side of the lake with a few tall, skinny pines that reminded us of something from Lord of the Rings or Harry Potter. Eva Lake was tucked into a shoulder of Mount Williamson, reflecting the peak in its still waters. Light through the trees at the far end of the lake tempted us to take the short hike around Eva Lake. Halfway ’round, we stood atop a cliff (just a few yards from the water’s edge!) looking out at Mount Dickey and Mount Coursier across the narrow, steep valley below.

We next hiked to Jade Pass, opening up views to yet another valley as well as Mount Coursier, Inverness Peaks and Mount Harry. From the pass, we descended rocky slopes and scree fields down to a steep meadow where we found the Upper and Lower Jade Lakes. And the outhouse with the most beautiful view of any privy in the world! 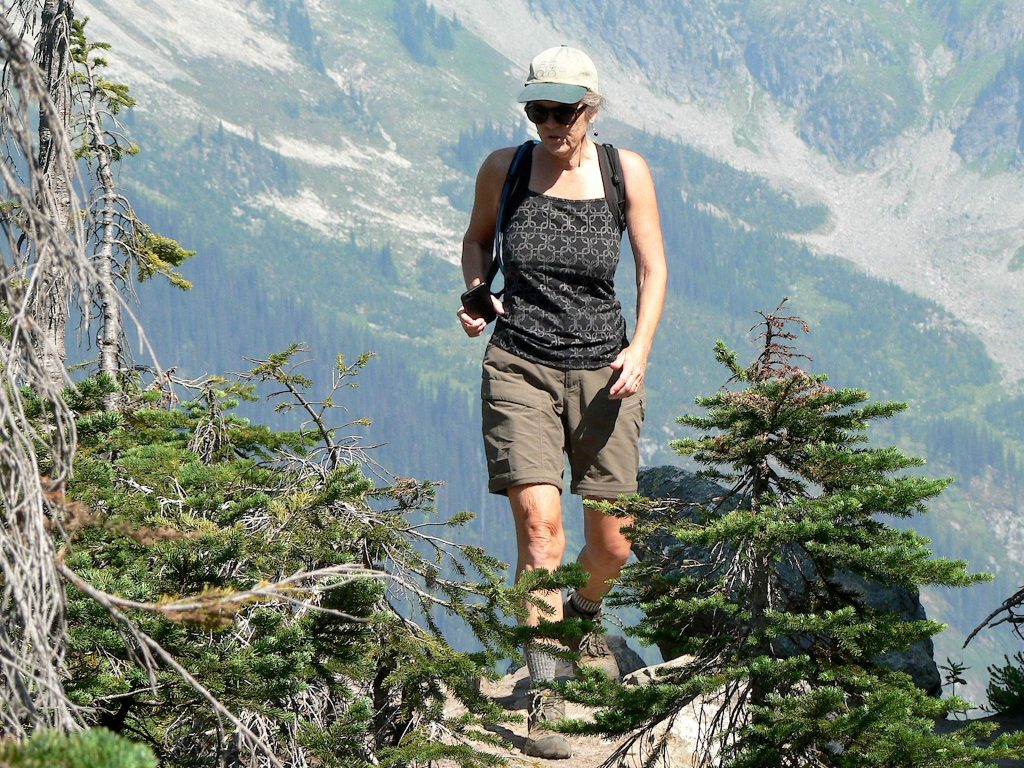